OUR WATER • OUR CHOICE • NO FLUORIDATION

Fluoride products are already available if people wish to have them. But many want to avoid them based on serious health concerns cited by the National Academy of Sciences and thousands of physicians and other medical professionals.

NO ONE should be forced to ingest a drug they don’t want through the drinking water, taking away their right to informed consent.

A 20 MINUTE FILM ON FLUORIDATION DIRECTED AND PRODUCED BY FILMMAKER JEREMY SEIFERT.

Hard as it is to believe, the three chemicals used to “fluoridate” drinking water are all industrial byproducts of fertilizer production and this is openly admitted even by leading fluoridation promoters such as the U.S. Center for Disease Control.

As the CDC’s chief fluoridation engineer has explained:

“All of the fluoride chemicals used in the U.S. for water fluoridation, sodium fluoride, sodium fluorosilicate, and fluorosilicic acid, are byproducts of the phosphate fertilizer industry.[i]

The National Research Council of the National Academy of Sciences similarly reports that:

“the most commonly used [drinking water] additives are silicofluorides, not the fluoride salts used in dental products (such as sodium fluoride and stannous fluoride). Silicofluorides are one of the by-products from the manufacture of phosphate fertilizers.”[ii]

As is true for many chemicals once declared “safe,” there is a fast-growing body of scientific literature supporting that there are real risks related to consuming fluoridation chemicals in drinking water.

Last year, for example, the federal government reduced the maximum allowable fluoride concentrations in drinking water by 40%, its first change in 50 years. [i]

The reduction came after an extensive study, Fluoride in Drinking Water, published by an expert panel of the National Research Council of the National Academy of Sciences (NRC Study) and data showing 41% of U.S. children were receiving too much fluoride and had visible signs of excessive fluoride intake – ie. “fluorosis.”[ii], [iii]

The NRC Study also reviewed a substantial body of scientific evidence raising significant questions about the link between fluoride exposure and potential health effects ranging from neurologic impacts and thyroid damage to risks that fluoride exposure increases the risk of bone cancer as discussed further below. [iv]

In 2014, top neurological researchers from Harvard named fluoride as one of the top developmental neurotoxins impacting children’s brain development in prestigious medical journal The Lancet.[v]

The report followed another large-scale meta-study showing that elevated fluoride levels in drinking water were correlated with decreased childhood IQ.[vi]

In 2006, another Harvard researcher published a study in Harvard’s Cancer Causes Journal, finding that boys who drank fluoridated water had more than a 500% increased risk of bone cancer.

These and other studies have led a significant number of water quality experts, such as U.S. EPA Scientists’ Union[vii] and the Oregon Department of Environmental Quality’s Employee Union[viii], to formally oppose the practice of water fluoridation.

For a comprehensive review of the main scientific studies regarding the risk of water fluoridation, we recommend visiting FluorideAlert.org.

Fluoride meets every legal and medical definition of a drug and is the only drug that is added to the water supply to affect human health- ie. dental cavities.

This was one of the reasons the federal government reduced maximum water fluoridation levels by 40% in 2015.

Even with this reduction, fluoridation promoters at the CDC admit that “if your child is only consuming infant formula mixed with fluoridated water, there may be an increased chance for mild dental fluorosis” and recommends using fluoride-free bottled water instead of tap water for mixing infant formula.[i]

But buying bottled water or installing very expensive water filtration systems that can remove fluoride are not options for low-income families that have no practical way to avoid drinking fluoridation chemicals if they are added to their drinking water.

[i]  US CDC, Overview: Infant Formula and Fluorosis, at: http://www.cdc.gov/fluoridation/safety/infant_formula.htm.

The way fluoridation promoters talk about fluoridation as one of the world’s “Top 10 Public Health Benefits” you would think its benefits were well established and substantial.

But scratch the surface and the reality is far different. For decades, water fluoridation was promoted with the argument that swallowing fluoride provided a “systemic benefit” and that fluoride would concentrate in teeth and be excreted through salivary glands.

But by 2001, this theory was rejected even by fluoridation supporters like the CDC, after scientific studies found fluoride did not work systemically, only topically. [i]

There is not a single double-blind study (the modern standard for showing scientific effectiveness) showing that fluoridated drinking water reduces cavities.

While fluoridation supporters use statistical tricks to inflate the importance of this difference, it is telling that the study they have long relied on as the key epidemiological evidence supporting the benefits of water fluoridation shows just a half cavity difference.

This is consistent with the fact that cavity rates in fluoridated and un-fluoridated countries have reduced at about the same rate since the 1950’s. 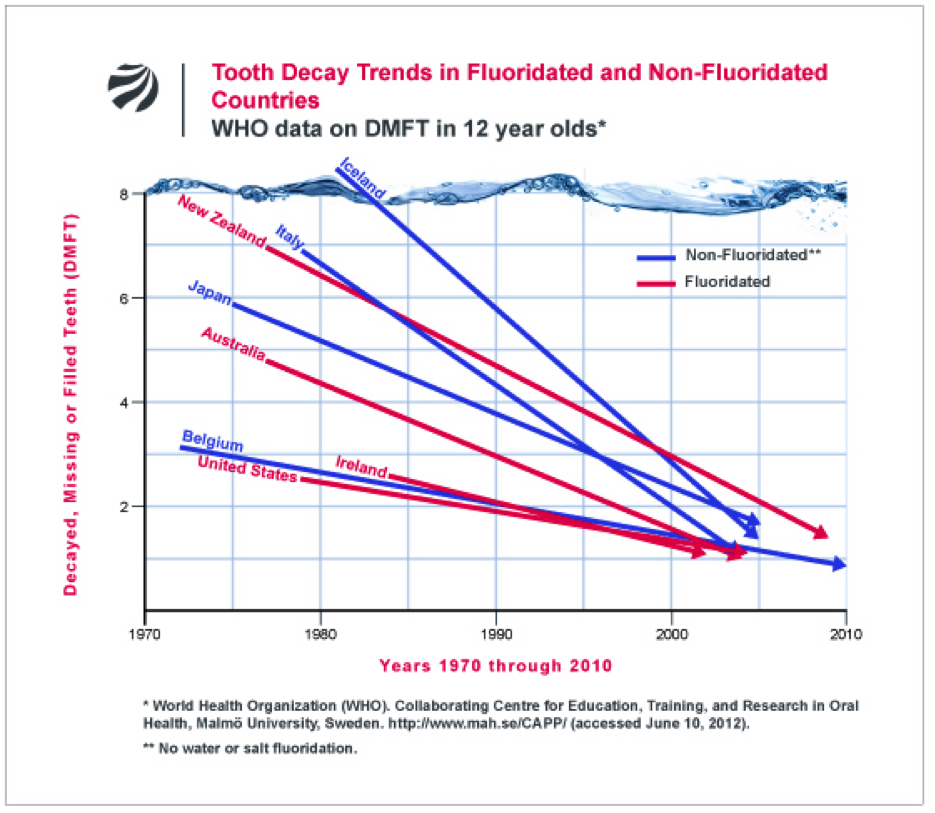 While fluoridation promoters continue to push the controversial addition of fluoridation chemicals to drinking water, there are important steps that we can all agree on to promote better oral health for children, such as increased access to care, increased preventative care, encouraging better nutrition, in-school dental screenings and allowing dental hygienists to do certain treatments on children’s teeth.